I’m really anxious and insecure about a lot of things, and I’d been adequately trained by life, advice from people who thought they knew and understood me, and experience on previous dates to do things to compensate for and hide this anxiety and insecurity. I show up early for things, because being late causes those panicky feelings, but I’d learned that being too early looked needy, and waiting for someone to show up to meet me also created the same panicky feelings. It was a fairly delicate Anxiety High Wire Act, and balance was pretty difficult to maintain. So for my first date with J, I got there early, but parked in a nearby shopping center lot, planning to wait in my car alone for a few minutes before actually going to the restaurant. I called a friend, as a safeguard, to let her know where I was and what I was doing, and also to stamp down the anxiety that came with waiting. My call to her was interrupted by the other line. It was J. It was still 10 minutes before our agreed upon meet time, and I had a momentary thought that HE was canceling due to weather…or just because he’d come to his senses and no longer wanted to meet me (wouldn’t have been the first time). I said to my friend, ‘My other line is beeping and it’s *him!* I have to go.’ I was really nervous about the call, but I answered it.

J began our first real date by laying to rest anxiety and insecurity with his presence and acceptance. We had a nice lunch together. He listened when I spoke without interrupting me. He asked me intelligent questions and seemed genuinely interested in my responses. He revealed things about himself that showed me he wasn’t afraid of complexity and that he was a very independent and patient man. I found all of those things extremely attractive. His calm steadfastness was obvious from the very first moment we were together, and it *made me feel safe.* Normally, on any first date, even in high school when I already knew the boys that asked me out through (sometimes years of) observation and reputation, I was completely guarded, because I was completely terrified about how things would go. No other guy ever attempted to calm my social fears, but J did, and it seemed effortless. (Whether it was or not, I’m not sure. He’ll probably tell me if it was intentional after he reads this. I’m guessing it wasn’t though. Because J still does that. I’m pretty sure that’s just who he IS.) He immediately began *earning* my trust. He didn’t just expect that I trusted him. He didn’t ever give the impression that he felt *entitled* to my trust, because I’d agreed to meet him.
We agreed to see a movie together afterward. We bundled up and walked out to our separate cars, which were covered from over an hour of light, continuous snowfall while we were inside. 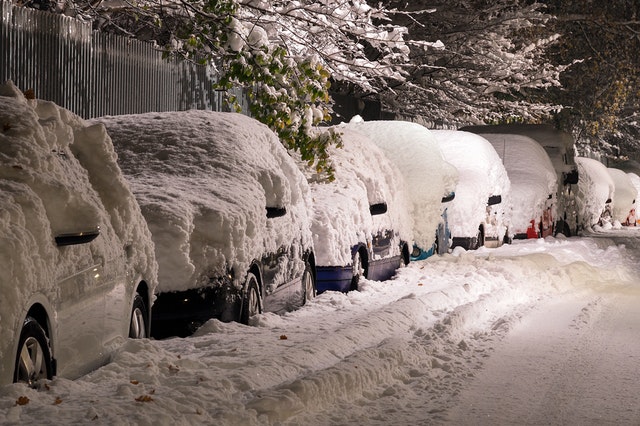 Before I could open my door to get my snow brush and scraper, J was already at my car, clearing the snow and ice from my windows for me, completely unsolicited. “Get in the car and warm up. I’ll do this.” That unprecedented chivalry and care just floored me. I’d spent a lot of years handling things by myself, not because I necessarily *wanted* to be independent, but because I was taught very young that I had to be. I’d never been treated that way before…not by friends, not by my family (including my parents, even when I was a young child), and certainly not by any other date. I’d learned that no one else had any interest in helping me or caring for me, and if they pretended they did, it was only because they wanted something ‘more’ from me. They’d only give if they could eventually take ‘more.’ So I had better be competent at fending for myself. J was the total antithesis to all my previous experience. He felt (and still feels) like magic.
I drove to the movie theater in this dreamy, infatuated haze, and somehow made it safely. I remember looking at him, and repeating the thought, all the way through the movie, ‘Is He *real?*’ (I still do this with J. Sometimes I stroke his beard or poke him on the shoulder to make sure. You know. That he’s real.)

Fifteen years ago on December 14, I met J in person for the first time, and I knew then, on that first date, I was going to marry him. I called my best friend to tell him this. B believed me. Because I’d never said anything like that before about some guy I went to lunch and a movie with. J doesn’t believe that, and to this day, maintains that he ‘didn’t do anything special.’ But he soooooooo did.

So now, in the love stories I write, the men display the following traits…
Thoughtfulness. Courtesy. Self-control. Responsibility. Care. Willingness to help others in need. Independence. Patience. Decisiveness. The desire to put others at ease and earn their trust.
Humility (’I didn’t do anything special, Jen. I just do what I think is right…’)
Because those are the qualities my real life leading man has that made me fall in love with him.