OK, I did a post on University of Kentucky basketball in March, to talk about how sometimes sports isn’t just sports; it’s metaphor for me, and how it’s always been a way I could bond with my dad. I also know I talk up Rachel Bloom’s television series, Crazy Ex Girlfriend a lot, but that’s because I admire good writers, and I can’t help myself. So to oddly connect these two things before I just wax nostalgic and poetic about the Derby for a while, for those of you (the vast majority, I’d wager) who have never been to the Derby or Kentucky for any other reason, so you can maybe second hand experience it, I’ll attach this little video here, which is a season 4 excerpt from the show that I think everyone will enjoy watching, regardless of whether you ever watch the actual series or not (the songs are the best part of the show…I can’t believe these actors sing ’em with straight faces).

I’m not a guy (obviously), but I do speak this language, and for this reason. That little parody song is funny because of how true it is. I can talk to my dad for hours about sports. I can’t speak a sentence to him about other stuff. It’s weird and sad, I guess. And (I guess like a lot of guys), I attach a lot of emotion to certain sports because they make me feel close to my dad when not much else does. And horse racing is NUMBER ONE to my dad. Bigger than baseball (a lifelong obsession for my dad…and my kid brother…and my high school best friend who is a guy…and me to only a slightly lesser degree). Bigger than Kentucky basketball (I know…for readers of mine who ARE from Kentucky…that’s a BOLD statement…there’s not much in LIFE bigger than Kentucky basketball).

I went to the race track with my dad about 14,000 times as a little girl (probably not an exaggeration…seriously). I bet I’ve been to more race tracks than the average person not employed in horse racing, because pretty much every place I went as a kid besides school was a race track or a baseball game or a shopping mall unless it was a field trip for school. I know basic handicapping. I know you don’t bet the chalk (favorite) if you want to make any money at all. I know what the difference between an exacta and a double is. I know what the difference between a trifecta and a pick three is. I know what a ‘box’ is. I know how to calculate an approximate win price based on a horse’s odds at post time. Anybody remember that Seinfeld episode where Kramer’s at the off-track betting place?

Yeah. I know what that means. That’s a real thing…’a mudder.’ It’s a horse that likes to run on a wet, sloppy dirt track. Likes the rain. A ‘mudder’ might win today’s big race, because it’s a rainy forecast in Louisville today.
I’ve watched the Derby (along with a bunch of other horse races) every year of my life. In the 4th grade, I had to do a project about Kentucky, so I picked horse racing as the focus. No problem collecting visual aids. I had programs. I had Racing Forms. I had ‘bad’ tickets (betting slips from losing guesses). I could speak about thoroughbred racing with nearly the authority of a seasoned handicapper or groom or jockey by 4th grade. Maybe the easiest part about 4th grade for me was that big project, actually. While other kids collected autographs of Mickey Mouse and Donald Duck and the other characters at Disney resorts on school breaks, I was petting Secretariat’s nose in his stall at Claiborne Farm in Lexington (Secretariat was big and red and beautiful…just like you think he would have been, for those of you who are wondering). The Kentucky Derby Museum at Churchill Downs in Louisville is probably the museum I’ve visited the most often in my life.

I know today isn’t a big deal for a lot of people. Not everyone is even aware that today is Derby day. J didn’t have any real awareness of it until he met me (he did NOT grow up in Kentucky…that’s probably obvious). I mean, he’d heard of the Kentucky Derby (it IS the most exciting two minutes in sport, after all), but he couldn’t have told you what track (or even city) it was held at or what time of year it was run (it’s always the first Saturday in May). He had maybe heard of Secretariat, but no other horses and no jockeys at all. He wasn’t bummed out that it had been over 30 years since the last Triple Crown winner (‘That’s not baseball?’ It’s baseball too, but it means something TOTALLY different in horse racing) like my entire family was. To me, I couldn’t believe there were people whose lives didn’t revolve around the Derby the first weekend in May. Mine always had. Hell, Kentucky as a state, or at the very least Louisville as a city, parties for two straight weeks for a two minute horse race.
I’ve been to three Kentucky Derbies, all of them with my dad, two of them before I was old enough to place a wager. So for those of you, like J, who don’t really have the Derby on your radar, here is the Derby described with equal parts reverence and humor by a native Kentuckian who pretends she’s a writer…

Churchill Downs is a racetrack that looks like a big church in the heart of downtown Louisville, Kentucky. Maybe it’s fitting that it looks like a church, because the Derby is that big of a deal…it can be argued it’s a religious experience…and it certainly draws a bigger crowd.
On Derby Saturday, the residents surrounding the track offer up their driveways and front yards for Derby pilgrims to park (for a small fee…probably cheaper than the main parking lots though, and easier to get out of at the end of the day). Travelers to the big race can also park at the Louisville Fairgrounds and ride the shuttle bus in (which is always what we did when we went). Natives of Louisville rarely go to the Derby themselves, unless they have people coming in from out of town for it. Kind of like I’ve heard native New Yorkers don’t go to the Statue of Liberty. There are cars lining every street and filling every yard for blocks around Churchill on Derby day and you better get there at the crack of dawn to get a spot like that.
Once you get inside the track (admission is way more expensive on Derby day than on a regular racing day at Churchill…and it STILL draws a huge crowd), there are literally people everywhere. Every grandstand seat, every corner, every betting window, every concession line, every stair, every square inch. Even rainy, gloomy Derby days boast over 100 thousand spectators under big hats and umbrellas or just getting drenched. Millions of dollars are wagered in bets all over the world.
The race is for three year old thoroughbred horses, usually colts and geldings (boy horses), but fillies (girl horses) can run too, and three have won against all male competition…Regret (way back in 1915), Genuine Risk (in 1980), and Winning Colors (in 1988). 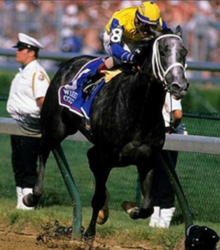 That photo is Winning Colors winning under Gary Stevens. She was my favorite. Gorgeous and gray and better than all the boys that year. I always will have a soft spot for fillies who win and for women jockeys. When I bet (I rarely do), I place bets on fillies and women jockeys even when they’re long shots. A woman jockey has yet to win the Derby, but someday. (Julie Krone is the only woman to ride a Triple Crown winner, at the 1993 Belmont Stakes on Colonial Affair.)
The Derby has been run every single year since 1875, including every year of the Great Depression and both World Wars, even when many other professional sporting events or entire seasons were called. The names of every winner of every Derby are painted along the moldings and trim around the interior of Churchill Downs grounds, with the winner of the first Derby (Aristides) and the most recent winner (which up until yesterday was Justify…but for a short bit today, the spot will be blank, waiting on a new name) grace each end of the paddock, where the horses prepare for their jockeys to mount for the call to the post. Before the call to the post on Derby Day, they also play My Old Kentucky Home, and I cry *every year.* And then the horses begin the post parade to the starting gate as television announcers call final odds and comment on track conditions and maybe make predictions about outcomes. There is this wonderful cocktail of science and superstition that goes into picking horse races that’s always fascinated me. I like girls who compete against boys. My dad looks at things more objectively. My gramma would always place bets on horses with names that had her family in it…like…if there were a horse called Sweet Hellcat Jen or something, Gramma would put $2 to win on that horse even if it was 100 to 1.
Then finally, what is normally a much larger field (15-22 horses) than an average horse race (9-12 horses) gets loaded up for two minutes and a few seconds of thundering hooves and absolute heart-pounding thrill.
The track announcer says, as the gates open, ‘And they’re off in the <number> running of the Kentucky Derby,’ and a sea of people…ladies (and some gentlemen) in fancy and/or big, outrageous hats (I once saw a woman wearing a hat that was a *working* carousel)…celebrities and millionaires (at the Derbies I personally attended, I saw Jack Nicholson, Larry Flynt in his gold wheelchair, and MC Hammer)…hardened handicappers…drunken college kids sliding around in the mud of the grass infield (the cheap seats)…and the roving vendors who normally stroll through the packed crowds shouting, ‘Mint Ju-LEPS!’…all stop what they’re doing to watch the horses run in breathless anticipation.

I don’t even like crowds. But being at the Derby is something to do at least once in a lifetime, and I’m glad I’ve been to a few. It’s a ‘bucket list’ kind of a thing.

I used to have a party every year on Derby Day where I made hors d’oeuvres versions of Kentucky hot brown and benedictine sandwiches and pimento cheese and fried chicken and waffle bites and a Bluegrass salad and a pot of burgoo and Kentucky Silk Pie. We had a buy-in name draw for $5 a horse and the show horse (third place) got their $5 back and the place horse (second place) got $10 and the winner got the rest of the money. Which wasn’t a bad haul for a 20 horse field. I made mint juleps (which…I don’t drink…and I find kinda gross personally…but I love tradition). J would buy grocery store red roses and we’d give the guests leaving one as they left if they wanted to take one.

But this year, I won’t be making Kentucky themed food and there won’t be any betting or extra people at my house. I’ll watch it on TV, probably by myself…maybe with J. But I’ll tear up when they play My Old Kentucky Home. And my heart will pound as the horses run a mile and a quarter in two minutes, probably in the mud. And I’ll see who wins, and I’ll know what new name is going up in the paddock at Churchill for the next year. And I’ll have something new to talk to my dad about the next time I see him. Hell, he might even call me after the race.