So today’s post is still about Lady Ghostbusters, but it’s decidedly less silly and fangirling.

I know, every Ghostbusters film is a plot driven adventure comedy. I like that. Everyone who likes any of the movies likes that about whichever one (or all the ones) they like. But I’m a character development junkie, particularly well written WOMEN characters. And the 2016 Ghostbusters has that. Even for a madcap comedy with a bunch of one-liners and special effects and dancing Chris Hemsworth in glasses (sorry…some ladies like Thor, but…I like Kevin…)

I also like any movie that contains positive friendships between women that have nothing to do with them competing against each other for things (spots on a cheerleading squad…their parents’ favor…the attention of boys…whatever).  I love that kind of fiction and I’m a sucker for it…literature, film and televsion.
Little Women. The Divine Secrets of the Ya-Ya Sisterhood. Living Single. Sisterhood of the Traveling Pants. How to Make an American Quilt. Waiting to Exhale. Golden Girls. Designing Women. The Ghostbusters remake combined my love for that fiction with my favorite action comedy of all time. So…
And I’ve mentioned before that my mind thinks in connection and metaphor. So when I saw this film, I personally related to the characters. I saw myself in them and some of my friends in them too. Like Erin…

Erin starts out hiding a big part of herself to be accepted, but she’s not happy. And she gets upset that the one person who knows the real her ‘outed’ her. She felt betrayed that she’d shared this vulnerable ‘Ghost Girl’ part of herself with a trusted friend, and that friend told other people…because SHE wasn’t ashamed. Really, though…the more Erin gets vulnerable and lets other people in, the happier she is. I had a (guy) friend tell me he didn’t normally enjoy Kristen Wiig because she’s ‘kind of a sad clown.’ Well…I mean yeah, but…maybe I understand that. I definitely related a lot to Erin. Boy…I felt that character development in a big, personal way. Because I hate being vulnerable with people and I hide myself a lot, but when I’m the happiest? It’s when I’m with people I don’t feel like I have to hide myself from. I’m glad a have a few people…friends…beyond J…that I can feel that way with now. I have a few Pattys and Holtzmans. And Abbys. 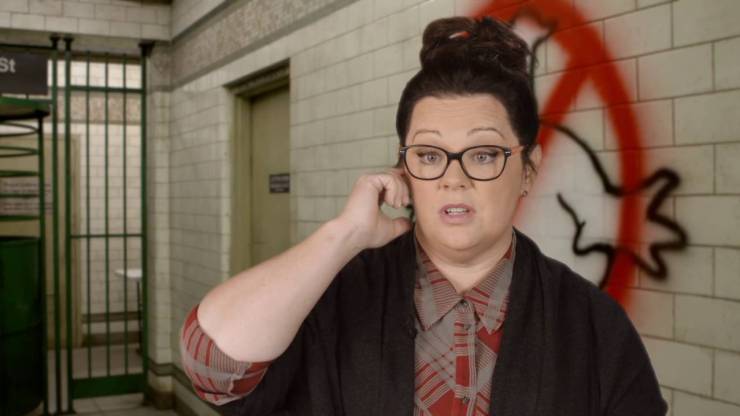 Wow. Abby. This character was so real to me when I was watching in the theater *next to* my real life Abby, it was almost scary. But I ain’t ‘fraid a no ghosts, so…
Abby was so accepting and unafraid to be herself and admit who she was without shame. I admire that. She showed ALL the science dork all the time and if you didn’t like it? Fuck you. People think I’m like that, and sometimes I am. But really, I’m usually quiet, hiding Erin in reality. And Melissa McCarthy was perfect casting there. (Melissa McCarthy plays my real life friend S in the imaginary movie about my life too). Abby made Erin braver. She’s the glue that holds things together. Just like my friend S, who watched this movie with me…not because SHE was super in love with Ghostbusters as a kid like me, but because she likes ME and all my hidden weirdness and will crawl right inside of it with me. Abby seemed to relish the other women’s quirks and foibles, as well as her own, and that was some bad ass writing. Because real friendship is like that. It’s not catty, ‘frenemy,’ competitive stuff. It’s radical acceptance, I think. That was Abby in this movie to me.

Okay, first of all, I just love Leslie Jones. She’s capital H, Hilarious. I loved how the writers brought up, ‘Look, you can’t be ALL science…you also need people skills and history,’ and Patty brought that. All the science and engineering wouldn’t have accomplished shit without Patty. And the women all acknowledged that…her contribution was as important as the science and engineering…they all needed each other. And I loved Patty’s protectiveness. I think that’s a grossly underrated or even ignored trait in writing women, particularly when it’s not ‘mother protecting a child.’ Patty protects her friends. Patty wants to protect her city. That’s real. I feel that way. I want to protect more than just my son. I feel that. And all of my best women friends feel that too…not only for their children…even my women friends who don’t have kids and don’t want kids…they’re protective. That’s my favorite part about Patty’s character. Even more than how funny she is. 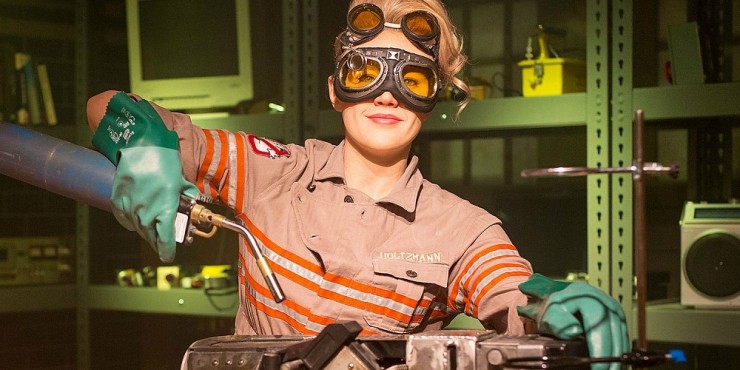 Holtzman is weird. Like…eccentric to the point that she’s arguably crazy. She’s a classic Mad Scientist engineer. Obsessed with weapons. Not too concerned with safety until she’s reminded that’s a priority. She’s off the wall and pretty much a wiseass and seems to delight in making people uncomfortable. I’ve been Holtzman before. I’ve been the person in the room that everyone else looks at and marks as ‘different…obviously,’ and not normally in an ‘outstanding in her field’ sort of way. Not too many people ‘get’ me. Not too many people want to even try. But again…Abby. And later…with Abby’s unwavering stamp of approval…Patty and Erin too. Holtzman (Kate McKinnon) is prettier and braver and more brash than me by several miles (I’m a lot more like Erin, personality wise), but at the very end of the film, she gives a toast to the other women, and it absolutely nails how I feel about my women friends that it feels like it took me a lifetime to find…

“Physics is the study of the movement of bodies in space and it can unlock the mysteries of the universe, but it cannot answer the essential question of, ‘What is our purpose here?’ And, to me, the purpose of life is to love. And to love is what you have shown me. I didn’t think that I would ever really have a friend until I met Abby, and now I feel like I have a family of my own, and I love you.”

There are a few women I know are reading this right now and wondering if I mean them. If you’re wondering? I definitely do mean you. Cheers. ❤
(I love you guys too, by the way…but I found you faster…this toast is for the ladies.)
There’s a Bill Murray/Pete Venkman quote from Ghostbusters II (not bad for a sequel), where he’s in court on the stand and he says, “Sometimes, shit happens, somebody’s gotta deal with it, and who you gonna call?”
Who you gonna call? You can call me. 🙂
(Not really. I hate phone calls. But you can totally email or DM me, and I’ll be there. I’m happy to be there for you.)