J came home from work yesterday and told me that he just couldn’t help himself…he told another work colleague of his that I wrote books. He didn’t divulge my pen name. He just had to tell somebody. And that’s never going to stop feeling the same as taking me to Disneyland for me.
Especially because of this new book.
J didn’t tell anyone to go buy the books, but he wants to. Especially this new one…that I’m not even going to make any money on, because we’re giving all the profit away.
He’s just that proud of me. And he wants to give more money to the non-profit. And those two things…WORK for me.

J wanted to tell his mate at work that I write romance (and I do…I personally classify what I write as romance), but he felt the need to qualify it, because in the vast majority of my work, the story about people falling in love and staying in love is not sex- or even physical affection-centric. That might have something to do with me being on the asexual spectrum. Don’t get me wrong. I like sex. With J, anyway. And I am moved by fictional depictions of physical affection and sex (sometimes).

Physical affection is really important to me in my relationship with J, not only because we’re married and that’s a typical romantic presentation, but because I was starved for physical affection to the point of being afraid of it for most of my life. It’s a big deal to me personally, and I don’t take it lightly or casually (although, as long as consent is honored, I also don’t believe there’s anything wrong with taking it lightly or casually). But I don’t focus on sex in most of my books (in arguably ANY of my books). Because I don’t think that’s where intimacy really is. It’s not where it is for me, anyway. So I don’t write it that way.

I went to a book store a couple of days ago with a friend of mine, and we walked past the romance section, with all the covers of scantily clad men and women with perfectly sculpted, hairless bodies and titles about cowboys and vampires and firemen and virgins and I just thought to myself, ‘Wow…I really don’t belong right here.’
I write about how couples get to know each other. How they notice the small details about each other and learn each other and share themselves with each other. How they WANT to share with each other. Their inner lives, not only their bodies. And I thought to myself about when I released my book Admission (the only book I’ve put out so far with human figures on the front cover in any capacity), I got some comments from readers about the cover art…this one… 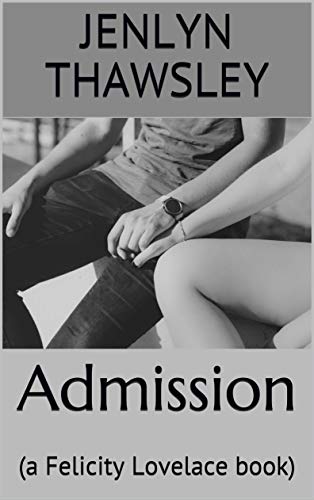 It’s…people holding hands. Which…yeah. I think that can be sexy. I personally think holding hands is a great leap of intimacy, but even though Admission is the book I’ve put out with the closest thing to a ‘traditional’ romance cover, it’s still not…you know…Fabio shirtless with his hair blowing back in the ocean breeze or whatever.

J asked me if I felt uncomfortable writing a same-sex romance a few days before I put the book out for publishing, and I honestly said no, even though I am a thoroughly heterosexual person. And the reason I didn’t feel terribly strange about it (although I do admit I feel slightly unqualified about telling the story, but that’s more for ‘I hope no one thinks I’m trying to take over someone else’s voice or story’ reasons than personal discomfort with the material) is because to me, romance and intimacy aren’t in sex or physical affection. I mean, I definitely believe in romance and intimacy in those areas in life, but that’s not where romance and intimacy LIVE for me.

I write intimacy in my fiction in the same places it lives in my real life with J. In how well he knows me. In how thoughtfully he cares about my happiness. In how much and how often he wants to share himself with me…the smallest parts.
Last night, I crawled into bed with J and he was already sleeping (he has to wake up VERY early to go to work every day), and I snuggled up to him and he put his arm around me to cuddle me in, which is very physically affectionate, and also pretty routine for us. But then, in a sleepy voice, he said, ‘So I watched that motorcycle show while you were reading with The Boy. You know…the one with the guy on it that you think sounds like H. Jon Benjamin?’

‘They rode a motorcycle that seats five people. In a row. It was as long as a car.’

‘Wow. Did they ride it with five people?’

‘No. They rode it with two people and three dummies. Like…Buster from Mythbusters dummies. They got pulled over by a cop and the cop wanted to take a picture because no one would believe him. Ha!’

‘Hahaha! Did he just pull them over because like, ‘What the hell is this?”

‘Yeah. They weren’t doing anything wrong. He just asked them to pull over…you know…nicely…because it’s…weird. One guy is in the front and the other guy is more toward the rear wheel…’

‘Yeah. Both the guys had to drive it at the same time. Like one of those big fire trucks I guess. You know what…I’ll look it up and show it to you after work tomorrow.’

I know this makes me an atypical writer in the romance genre to some degree. And maybe it even makes me an atypical human being. But to me, that’s what intimacy looks like. J was sound asleep. And he woke up to tell me this piece of a television show he likes about motorcycles in bed last night (and I know he was exhausted), because he couldn’t wait to share that with me. And he knew I’d *want* to hear it (and I did).

I guess this post is for those of you who have NOT tried out my fictional stories, to let you know, they’re not really all that traditionally ‘sexy.’ But I think they are very, very intimate.

I hope if you have ever enjoyed anything I’ve written, you give my fictional work a try sometime. And especially now, I hope you want to try out Lit, when the profits are going to a good cause. J is proud of that book. So much so that he’s debating outing me at his work (he won’t though…haha!). I love that he’s so invested in me. That’s real intimacy.