I’ve discussed my vacation with a lot of people (a lot of people for me, anyway) since we got back. And a few of them have said things, like, ‘You went back to Yellowstone?!’ or, ‘You went back to Disneyland?!’ followed by, ‘You guys must love it there.’ And we do. But loving a place and what it has to offer isn’t the only reason to make a return trip there. Sometimes, return trips aren’t fun.
Sometimes, you go to a place to learn. Or to teach/let someone learn about you. Or because you feel like you have to go there…to accomplish something…out of duty. This post isn’t about our vacation. It’s about my return trips to another place.

I went the first time when I was in college in the late 1990s as a Political Science major. (Bill Clinton, a Democrat with whom I agreed on paper a lot of the time, but honestly never trusted as a man, was president.)
I didn’t wait in line at the airport for security, and I flew right over the Pentagon and several other landmarks into Reagan National, because this was before September 11, 2001.
I was awed at so many of the sights. I took pictures of everything (also pre-digital camera ownership, so…I had to *develop film* and everything). The Lincoln Memorial in person is so much more impressive than what you’ve seen on film, it’s hard to describe.

I saw the Vietnam Wall (also pretty indescribable if you’ve not actually been there). I took the Metro to Arlington National Cemetery, and saw the changing of the guard at the tomb of the Unknown Soldier, and the eternal flame at the Kennedy grave site, and the whole place felt hallowed and historic. It was a serious, scholarly trip, taken pretty much for and by myself. I felt pretty good after taking that trip, though. Accomplished and content and forward thinking, despite focusing on so much history and somberness.

The next time I went was the first trip ‘away’ I took with J. (George W. Bush, a Republican I almost never agreed with on paper, but thought was probably a generally good person in his personal life, was president.)
My best friend at the time and his fiance lived in a Maryland suburb of DC then, and the trip was to see them, for J to get to know them, for them to get to know J, but J and I did a day in DC alone. I think J was a little fascinated at what a history and politics nerd I was, because I was actually working in an unrelated technical field. I got really sentimental about the WWII Memorial…it was brand new then. 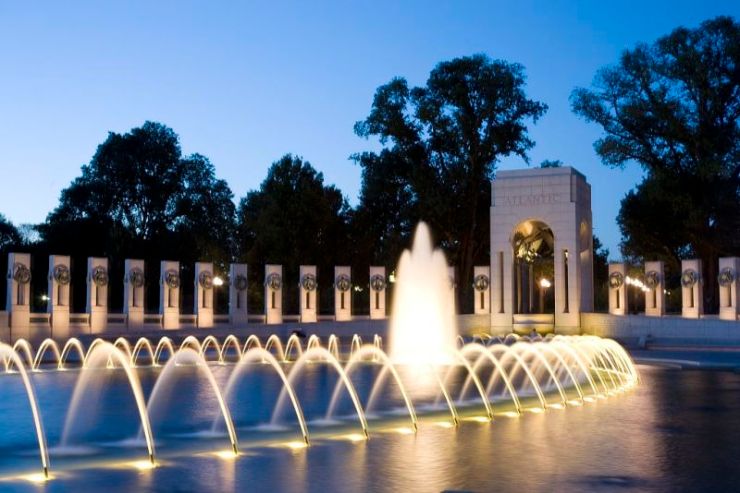 I grew up listening to stories from my grandparents, who got married and became parents during The Great Depression. They were very young. The first vote my grandmother cast in an election was for Franklin Roosevelt…*after* she became a mom (voting age was 21 then). My grandfather was too old and my oldest uncle was too young for the WWII draft, but they had lots of stories about rations and getting news on the radio and local friends off to fight and women going to work in factories. My granddad WAS a firefighter for over thirty years, and firemen were community members who were looked toward for leadership when it came to curfews and things. WWII was still living history for me even though my grandparents had passed. J and I are from different states and we took touristy pictures in front of ‘ours.’ That trip was amazing too. I felt like I was sharing it with all the people that loved me the most, even though J was ‘new’ and my grandparents were gone. I felt hopeful and positive and oddly romantic, because J seemed to appreciate and admire all my political and historical dorkiness.

And then I went in January of 2017. To the Women’s March. Because my traditional, 1950′s homemaker grandmother (they parented in the ‘50′s and ‘60′s too…that’s when they had my dad), instilled in me every Election Day we had off school, when we walked hand in hand up to her polling place to vote (she never had a driver’s license), that my voice mattered, and I could and should use it. She remembered that her mother didn’t get to vote until 1920. Sure, I went with a friend, but it wasn’t a fun trip. We didn’t sight-see. It wasn’t educational or sweetly nostalgic. It was anxiety-riddled duty. DC didn’t have the same energy or feel like a place I connected with at all. It was the only trip I’ve taken anywhere at any time in my life where I felt such a clear sense of purpose. There were so many people there, feeling similar feelings as me. Maybe I should have felt accomplished and forward thinking and content and hopeful and positive…certainly more than my other two trips, which were *vacations,* really. But I didn’t. I left feeling only slightly less anxious than I did arriving, and even that poor excuse for consolation relief didn’t last very long. That knot of anxiety is still there, since two Januarys ago. Most of the time, I can keep it quiet, but sometimes, it flares up and demands to shout everything else down.

So now, I’m thinking about all three of my trips to DC.
About how my grandparents, the children of immigrants themselves, would feel about how poorly our country is treating immigrants and asylum seekers now. How they would feel about white supremacists and neo-fascists seeming to gain a foothold when they were so proud to have lived through what they thought was the defeat of fascism, when they remembered times in their lifetime that huge sections of the US population ‘didn’t count.’ I wondered what President Lincoln, or Theodore Roosevelt (an early progressive, particularly with the environment), or President Eisenhower (who orchestrated D-Day…who was president when the Brown v. Board of Education Supreme Court ruling came down)…ALL *Republicans*…would think of an agenda to turn back progress in science, environmental protection, race relations, and national unity…what would FDR and Eisenhower think of a United States president unwilling to unequivocally denounce *Nazis?* What would JFK and Ronald Reagan and George HW Bush think about a president wanting to build a wall when they all (bi-partisanly, by the way) mourned and denounced the building of the Berlin Wall in Germany and wanted it to come down so desperately. I’ve been thinking about how, while I love history, and The Boy has never been there, I don’t want to take a family trip to DC…because it would still feel like it felt two Januarys ago to me, not my other two trips there.

Things are different now. It’s not a Democrat or a Republican thing in DC now; in America now. I felt at least reasonably good about my own life and the lives of my friends through Democratic and Republican presidents in my life. My candidate hasn’t always won the primary or the actual election, and I haven’t always (I’ve actually *never*) fully liked the person holding that office, but I never felt like, ‘Oh for sure we’re doomed,’ when it didn’t work out my way. Except for this time.
While I know this hate of ‘other’ and change and progress, and false sense of white/male superiority has always been there, festering beneath the surface, since the beginning of our history, this is the first time I’ve seen it be so detached from shame in my lifetime. (I wasn’t around for the slaughter of indigenous people, or slavery, or women’s suffrage, or Japanese internment camps, or the Civil Rights movement, or even Roe v Wade…I’ve only read about those things.)
Even now, as a white American, steeped in privilege, none of this emboldened hate practically affects me. But emotionally, it DOES. I do have empathy for other people. My natural inclination is to listen to someone else and absorb their feelings, and I am feeling from my friends who are non-Christian, science/environment loving, LGBT+, disabled or dealing with chronic illness or other physical or mental health conditions, people of color, women, artists, or progressives (or some combination of those things) a *lot* of pain and fear. A LOT. And I am wondering where the, ‘I’m not going to let what’s going on affect my peace and happiness,’ line is. When does it become worth it to the ‘moderates’ and ‘centrists’ I know to speak up? At what point does their ‘peace and happiness’ cease to outweigh so many other people’s pain and fear? Does that point EVER come?
And I’m wondering when or if I’ll ever feel like I want to go back to DC.
As optimistic as I normally am…the prospect of another return trip is not looking good.