First, I don’t want it to seem like I’m trying to capitalize off of anyone’s grief and pain. That is never something I would do.
And I was serializing Weight on the actual date of September 11, so I didn’t post this piece then. That wasn’t only for story continuity. More importantly, it was to make a point that we shouldn’t only remember September 11 and its implications and consequences on September 11, but it should become a part of how we think about things…how we live our lives.

My family is full of firemen.
The grandfather who raised me was a fireman. My uncle and my godfather and two of my first cousins are/were (my uncle has passed like my grandfather and my godfather and one cousin are now retired) firemen. I’ve never doubted that they were exceptionally brave, caring, and protective men. But on September 11, 2001, that was put right in my face in an undeniably painful way. There is a saying about firefighters that they (at least the ones in my life) like to repeat that goes, ‘When a building burns, everyone else runs out. Firefighters run in.’
Logically, I always knew that. That’s true. That’s literally the job of a firefighter. But on that day…I watched other firefighters actually do what my family did every day live on national television.
My family has seen some awful things. They weren’t NYC firefighters. We live in the American South/Midwest. But they do that same job. They willingly put themselves in that danger on a regular basis. They have friends who have died on the job too, fighting to save someone else’s life…to keep someone else’s home or business from being destroyed.
And our national lawmakers want to call these brave souls selfish for wanting their healthcare covered. In the state I live in (and unfortunately many other states), lawmakers want to call them selfish for wanting pensions fully funded.

I love firefighters. I always have. I didn’t need September 11 to solidify how much I value and respect them, but it DID.
And as a writer, when readers ask me questions, one of the most common ones I’m asked is what inspires me when I create fiction. The legacy of firefighting in my family definitely inspired parts of my novel, Waiting. And while I don’t know anyone personally who ran into the World Trade Towers on September 11, 2001, that date affected me and my family in a very real way, from hundreds of miles away, because of that legacy. I don’t normally excerpt my novels here, and I’m not including a purchase link, because I just feel like that’s crass in a 9/11 memorial writing piece, but I feel like the fiction I wrote about this says more than whatever trite sentiment I could come up with now, and I feel like I need to acknowledge the day and its meaning here in some way. So…an excerpt from my novel, Waiting. 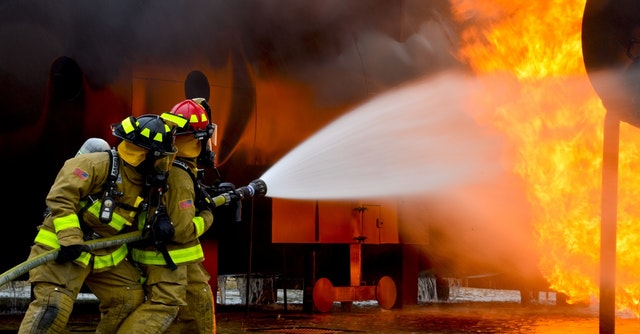 *THE FOLLOWING ARE EXCERPTS FROM AN ORIGINAL WORK OF FICTION*

Clark stood in front of his wife’s grave and wept. He’d just laid fresh flowers on it. Betty didn’t have a favorite flower, so Clark always just bought the ones he thought looked the prettiest for her on the days he visited the cemetery. He was a day later than his planned visit this time, because the day before had been a more wearing day than it customarily was, and it was customarily not Clark’s favorite day of the year anyway. The flowers he’d bought on the way…one day late…were red and white roses. There was a lot of red, white, and blue out in the stores one day later than his planned visit day.

“Yesterday was a real bad day, honey. I know you know that and I don’t have to tell you. It’s always a hard day every year, but yesterday…was a real bad day. Sean’s okay. He’s…you know that too, but…y’know, yesterday was…it was the first day I really worried about outliving my boy. Our boy. It was the first day I wish he had a different job. That I wished he didn’t look up to me…that he didn’t wanna be like his old man. But he’s okay. S-Sabrina just started her new job. She finished up school with honors in the spring. And she’s workin’ now. She’s real independent. No roommate or anything and living on her own because she said she didn’t like anybody but Roger and Becca and Ellie and that kid that Roger hangs around and they were all away, so it’d just be her. She doesn’t take any shit, y’know?” Clark stopped and let out a wet chuckle, thinking of his granddaughter. “She gets that from you. S-stubborn and smart and brave. She didn’t get a lotta time with you, honey, but she gets that from you. I guess Sean and Daisy taught her a lot about you. And Helen. Helen tells a lotta stories about you now. And she even will ask me how you are sometimes, because…I dunno. Pat’s worried about her. I guess you know that too. You probably even know if he’s right. He’s thinking of selling the house and moving into an old folks’ home with her. So maybe she won’t be so confused about things. The memories in that house. Y’know? I gotta…I gotta tell you about something good now. ‘Cause today’s been a pretty bad day too. Roger is…finishing up that degree and he drove up from school last night to be with me and the kids…his family, because…well I’m sure he got to thinkin’ about Sean too. And me and his mom and Sabrina. And how…well, Sean and Daisy told him go back to campus so he doesn’t miss any more class besides today’s because he’s so smart, honey. And he’s got such a big heart. I guess he gets that from you. You’d…you’d be proud of him. And he has a girl and he says they’re gonna get married right after they graduate. That’s young. We were that young…we were younger than that even, but somehow he seems younger than we were. Well, I just had to tell ya something good before I went home, honey. Because yesterday…today…I’ve been having…we’ve all been having some bad days. I love you. Still. I miss you. Every day. I really miss you today. And yesterday. I wish you were here. Or maybe…maybe I wish I was there. Where you are. The bad days weren’t so bad when we were in the same place.”

On September 14, 2001, after days of national grief, felt with particular sharpness in the Mason house, even though no one they knew personally was anywhere near the actual trauma, Helen turned off the nonstop television coverage of emergency personnel working tirelessly through grief. Patrick sat in his armchair and cried, something he rarely did. She went to sit on his knee and stroked his face and asked him to tell her about his worst day as a fireman.

“Are you sure you wanna hear about this?” Pat nervously asked, as he debated whether or not he could tell Helen about his truly worst day as a fireman, or if he would go with a publicly acceptable second place. He didn’t want to tell her anything sad or scary that she didn’t already know. She already knew more than enough. His girl wasn’t a ‘sad’ or ‘scary’ girl. His main worry in going with his back up story was that she’d be able to tell he was lying. Even when they’d first met, as sweet as she was, she had an eerie ability to see through bullshit of any kind. Lies of omission, he could get away with occasionally, if they were minor, but she had a way about her that made him give up information normally. He couldn’t even throw her a surprise birthday party or hide a new pair of earrings for her in a dresser drawer. But he’d made a decision to never tell anyone exactly what he’d seen in the house that day during his last year as a fireman in 1982. The only person who knew what he knew was Clark, who’d been on the same run with him, and they never discussed it either. Every year on the anniversary of that awful day, the two of them went down to the Fireman’s Hall, and had a couple of silent pints, and occasionally shook their heads at one another. Sometimes in a moment alone, doing something that should never conjure up thoughts of that day, he’d travel back in time. He remembered the feeling of pending dread when he heard the call come across the dispatch scanner. As soon as he heard the address, he knew the report was falsified. For only the second time in his thirty years of firefighting, he felt nauseous before even arriving at the job, somehow having knowledge without confirmation that all of his dread was going to come to fruition. There wasn’t going to be a last minute miracle play to turn the outcome around. He knew what his crew would find when they entered that house would be ugly loss…

Those thoughts were coming to him in rapid flashes, as he pored over whether or not Helen would sense he wasn’t being totally forthcoming with her as he explained another awful day on the job to her in that day’s place. He physically shook them from his head and answered her question with something more understandable and predictable, particularly for the occasion. “My worst day as a fireman was May 28, 1977. Rebecca was just a baby,” he started.

“Of course, Pat. The Beverly Hills Supper Club Fire,” she said, feeling silly about not remembering it.

Pat sighed audibly. This release was the relief that he was going to get away with his minor and benevolent dishonesty. Helen of course, recorded the sigh as the painful memory of a nationally recognized tragedy all those years later. Then he began crying again with renewed pain for the brotherhood of firefighters suffering through his literal worst nightmare on television, guilty to feel grateful it wasn’t him, and it wasn’t his best friend and brother, and it wasn’t his boy, Bill, and it wasn’t his nephew, Sean. And he cried remembering the Supper Club fire, and he cried because it was another thing Helen didn’t remember anymore without being reminded, and he cried because he missed his sister who died on September 11, 1986 and he felt that day was now even more cursed. He cried for Clark and Sean and how miserable they must be feeling if he felt this poorly today, and he cried because of the tumultuous life Sean’s wife must have endured before he’d talked Clark and Betty into letting her live with them as a teenager. He cried because he’d lied to Helen…

Please when you remember 9/11 (or learn about it if you’re very young), I hope you think about firefighters and what their job truly entails. And I hope you value them on days that are not 9/11.