This post is about Christmas as a kid, and my odd relationship with my parents, and my weird affinity for joy and magic and romance, and J and his total lack of affinity for magic, but somehow…he IS magic.

I know. I’m a rambler. I connect up some weird shit.
Hopefully it all shakes out making some kind of sense.

OK, so when I was a little girl, I had my youthful exuberance and natural joy and enthusiasm shushed a lot by my parents who Just Wanted Some Peace and Quiet Dammit; Don’t I Know They Worked All Day.
Reading books with me was annoying. Taking me to a friend’s house or having my friends over to our house to play with me was annoying. Toys that made noise were annoying even if I was entertaining myself. Playing with me themselves with toys that didn’t make noise was annoying. Spending time with me and engaging personally with me in any sort of emotional or physical capacity was annoying. I got dragged along to what they wanted to do on weekends and if I made any kind of noise or alert that I wasn’t having the Best Time Ever, standing around at the horse race track or in line at a shopping mall, I was being annoying.
Just Go Do Something Quiet By Yourself. Just Calm Down. No One Wants To Hear It, Jen. Don’t Sing.
But for some reason I still don’t understand, because it’s a complete anomaly from the rest of their parental behavior, my parents took Christmas and particularly my belief in Santa Claus REALLY seriously.
I’m sure you’re all shocked that the woman who makes up love stories as an adult was predisposed and prone to magical thinking as a kid. I believed in Santa for a loooooong time. I’d probably still believe if my mom didn’t finally decide she’d had enough of facilitating the magic (her patience for making these efforts ran out the Christmas after I turned 10). Ten is old for a believer. And I’ll own that part of that is my own optimistic, hopeful gullibility, which I still have about lots of other shit at 41 (and I’m not apologizing for that…I like Optimistic Me). But part of it was just how much effort my parents put into maintaining the deception (for the record…I understand both sides of this argument…J and I told our son there was a guy named Santa who brought gifts to good kids at Christmas…and he stopped believing when we told him the Christmas after he turned 8. I think there’s very real merit to never deceiving your kid. I certainly get that, particularly based on J’s personal history with Christmas. But I think there’s merit in letting your kid believe in magic and selfless giving for a while too…Santa is a complicated thing…)

I think it’s telling that the one thing my parents put a bunch of effort into for me as a kid was orchestrating a grand lie. And manipulating me with traditional fiction to get me to behave the way they wanted me to.
“You better watch out. You better not cry. Better not pout; I’m telling you why…He knows if you’ve been bad or good (crying and pouting is bad, whatever the reason, obviously)…so you better be good for goodness sake...”
(Side note here…The Boy had only heard the Springsteen version of Santa Claus is Coming To Town until he got into all day school…and he was SUPER confused when he heard the original in first grade public school music…”This song doesn’t sound like this at MY house…” I’m not sorry.)
Optimistic Me just likes to focus on how the effort made me believe in magic and goodness for a while (and it did…and maybe it laid a foundation for me continuing to believe in magic and goodness when there’s a lot of shitty reality around me in the world.)

Anyway, my parents were good at it.
They had answers to all the skeptical childhood questions…
“But we live in an apartment with no chimney…how does Santa get in?”
Through the patio door.
My dad put on his snow boots, and walked outside on the patio so I could see Santa’s footprints in the snow as proof.
Santa’s gifts didn’t come wrapped. They came out of the boxes and ready to play with.
Ever been driving at night and seen a plane fly overhead? You know that red light on the nose of a jet? To a kid who believes in Santa, but couldn’t even conceive of ever flying on an airplane? That wasn’t the light on the nose of a jet airplane. That was Rudolph’s nose. That was Santa. He was making the rounds. Making sure all the kids on the nice list were still being nice. (You better be good for goodness sake.) 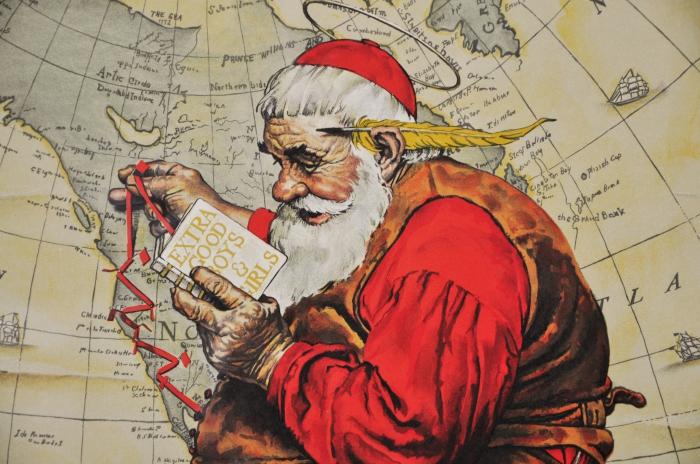 I won’t lie. I liked being rewarded for being good. That’s the one time of year my parents (through the Santa deception) followed through on that. I saw some real recognition for how low maintenance and quiet and studious and kind and smart I was all year, just like they wanted me to be, at Christmas when Santa brought me something. And the Christmas I was in first grade, my mom really went above and beyond to get me the thing I asked Santa for.
For you 1980s kids…I wanted a Cabbage Patch Doll. That was a super hot toy in the early-mid 1980s. Major toy stores SOLD OUT of them and there was no Craig’s List or EBay or Amazon Prime or a Sinister Dark Web Underworld Black Market to find one…you were just shit out of luck, and my parents were, because there was no time to shop for one until the local stores were out of them. My mom won one for me on a radio contest because I only asked for one thing and that was it. My dad went to the radio station to pick up the prize when he got off work on December 23 (cutting it super close, I know). The station receptionist looked troubled when she saw my (very white) father and handed him the (obviously black) doll they had for the contest my (also very white) mother won. “We can get you a different one, sir, but it might be after Christmas…”
My dad said, ‘No. Ma’am. I want THIS one. My daughter wants THIS one. From *Santa.* It can’t come *after* Christmas…’
I still have that doll. Now it’s The Boy’s. But still.
It’s probably actually a testament to my parents’ commitment to using Santa to get me to behave the way they wanted me to, but I like to still think of that doll as a symbol of the one time of year they made some real effort for me, and of their progressive-especially-for-white-people-in-1980s-Kentucky attitudes toward race.

J stopped believing in Santa before he was 5, and he was always extremely skeptical even before that.
See…J was good too. Like me. He was smart and quiet and helpful and a low maintenance kid. He was always kind. He never got into trouble or did mean or underhanded ‘boys will be boys’ type of shit even in a time when it was even MORE accepted and excused than it is now. But when he asked Santa for things, he didn’t get them. He didn’t get rewarded with ‘stuff’ for being good. Because his family couldn’t afford to indulge him in the Santa myth. I didn’t grow up rich or even financially secure by any stretch of the imagination…but my folks could at least get me a present or two from Santa every year. J’s family couldn’t afford to participate in magical deception at all.

When I stopped believing in Santa, my parents stopped making any sort of effort to acknowledge me at any time of the year, and I started to notice how their relationship worked with each other too. And I stopped believing in all kinds of magic. Including romantic love. I thought it was all a crock of shit. I saw marriage as a partnership you enter into with someone to pay bills (and that’s pretty hard). You don’t really even have to like them much. You just have to trust them to put their paycheck in the pot to write checks and share space so you don’t have to live with your parents when you’re over 25. I REALLY believed that. And I couldn’t even find THAT. Until I met J.
My ultra-realist, scientific, dry-to-dark sense of humor having, ‘prove it’ skeptic of a husband made me believe in magic again. In December when I used to believe in Santa.

2 thoughts on “I’m a Believer”