THIS IS AN ORIGINAL WORK OF FICTION…
It will be published in several parts over the course of several days. 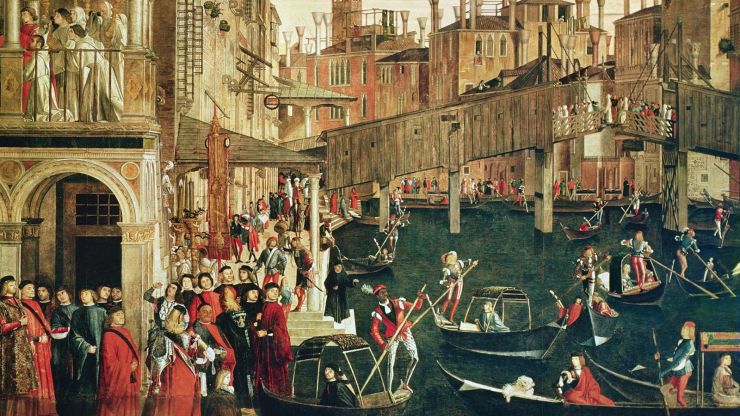 Melinda Adesso awaited the arrival of her painter’s apprentice, Matteo. She hoped for an allowance to her request to paint inside her benefactors’ kitchens, and had sent Matteo along with correspondence asking for such. The last time she’d been at the estate to receive more portrait commissions, she’d admired the lone baker hard at work, firing and managing duel ovens. Melinda required written communication and usually her underling as an intermediary as she didn’t speak. She’d been able to form words as a small child, but near the turning of her sixteenth year, when the words, ‘Thank You’ appeared on her wrist, she’d lost more and more verbal ability in the three years that followed until presently none remained. She still obviously understood language. Against Venetian society norms, her father, having no sons, and as Melinda’s words had still not appeared on her skin by the time she became a woman at age twelve, assumed she was doomed to a life without a mate, and taught her to read and write to increase her chances of survival as a single woman in Venice. She also always listened carefully, which she honestly preferred to speech even when she had the capability. This reticence disguised for a while her educational achievements and suspicious artistic acumen. She was a gifted painter, particularly of work featuring the human form. She had an almost mechanical, scientific approach to producing replicas of anatomy on canvas, but there was a pronounced emotional investment and outpouring in her work that was unique. She had become a sought after portrait artist despite her femininity, because of not only the physical details she captured in faces and frames of shoulders and length of limbs, but of the essence of the subject as well. And her constant, unwavering silence allowed the devout to forgive her literacy and skill as necessity and God-sent instead of evidence of witchcraft. Her silence even won her Matteo…her own apprentice…as his family who had more than her own, recognized that she could help make him great. In fact, they were certain her tutelage would give him talent his maleness would ensure was more widely recognized and desired than her own.

She painted many portraits and depictions of biblical or mythological scenes for wealthy families for income, and since her sixteenth birthday, hid the words on her wrist from everyone…even her doting and worried father…in order to continue to paint. She loved creating art, even the conscripted portraiture, but her true love, what she indulged in when not creating on assignment for money, was painting the everyday magic of humanity. She painted children playing. She painted her sister removing cobwebs from corners in her father’s house to prepare for her future in-laws to visit to arrange a marriage. She painted her father’s head in his hands, worrying about the future of his daughters and the smile on his face as he collected olives from the trees on his land and pressed the oil from them. And she wanted to paint the Tagliani family’s baker’s arms and hands…kneading and shaping dough, mixing ingredients and stoking fires and reaching into impossible heat to retrieve breads and cakes to serve at the dinners her wealthy benefactors often laid out for family and guests. She was drawn to the care and skill and dedication he had to his work. His hands were works of art waiting to be created; for her to create them. And his hands created their own works of art, though few people considered food and its preparation that way. Melinda did. And not paintings of fruit bowls and water and wine and olive oil and milk pitchers, but the actual making of bread and baked goods and pies and stews…that was its own art.

A young man delivered a written parchment to the Tagliani family seeking permission for his master teacher to paint their baker at work making bread until her next commission presented itself. The Lady Tagliani sent her approval back with the boy. Melinda was the very definition of modest and unobtrusive. She never spoke a single word and certainly would be no trouble to the baker or the rest of the workings of the house setting up to paint. Lady Tagliani walked to the entrance of the hot kitchen to inform Luca Necchi, their baker, who had in the past year taken over those duties from his aging father, that an artist with an assistant would be observing and painting him at work for the next several days to weeks. “Yes, ma’am,” he said. When Melinda and Matteo came to set up the following morning, Luca was surprised to see a woman behind the easel, watching him. He was marginally distracted and self conscious, being watched, and felt that were the painter a man, he would barely notice the presence, but then thought that a man would want to engage him in conversation, valuing his own work over Luca’s, and it would likely be even more distracting. Luca didn’t want to upset her concentration (she was obviously in the flow of work), so he called the boy over into close confidence and asked, “Why is she painting me?”

“Signorina Melinda always paints people she cares for or admires doing what they always do when she is not painting something requested by her patrons.”

“She…admires…me?” Luca was again taken aback that any artist would want to paint him. Painters usually wanted to paint portraits of the wealthy and powerful or honoring great figures from history or religion when their work featured people. “Did…did she tell you this?”

“Well…no. Signorina doesn’t speak. But she mentioned the skill and the beauty of your hands working in her letter to the lady of the house to come and paint today,” said Matteo.

“I’ve never heard her voice. She can hear and read and write, though.”

“The skill and beauty of my hands,” Luca whispered to himself. He paused in his work (it was a good place to pause, waiting for dough to rise) and looked at his own hands and smiled. And then he raised his gaze to Melinda, who was looking back at him.

“Thank you,” he said to her. She dropped her brush to the ground and Matteo hurried to pick it up and clean it for her.

Melinda made sure the words on her wrist were hidden from his view and scribbled, ‘Go for today,’ on a small scrap of parchment and handed it to the boy. He looked expectantly at her and she nodded confirmation. Matteo left and she stood to approach the baker. She pulled the edge of her sleeve back to reveal the words on her wrist to Luca. His words. His first words to her. The first words her soul mate would say to her. Luca’s father had made sure he could read their native language so he could continue service of the Tagliani family, and he recognized the simple phrase on Melinda’s wrist as his own words. He showed her the indecipherable markings on his forearm. “Do you know what this means?” She shook her head. “But you can’t say the words on your own skin that you can read for sure?” She shook her head again and delicately touched her throat, indicating that she couldn’t speak at all. “Do you think…this means my soul mate is…you? Because no one can read…whatever this says? Maybe these markings…” He ran his index fingers over the foreign symbols on his skin: ‘Hey you dropped your phone.’ She paused and nodded. “I’m not sure what to do or say now.” She touched his arm, holding on at the letters that decorated it and then took his hand to press against her own wrist. She smiled at him and nodded for him to return to his work and she returned to hers. She took out a parchment and wrote to him that she was certain they were each other’s soul mate, but that she didn’t want to sacrifice her art for marriage. That marriage for her would mean leaving her painting aside to care for children, and while she was sure he’d be a wonderful husband and father and would provide for her, she couldn’t imagine a life without painting. And she couldn’t ask him to forgo marriage and children himself on her behalf; that she understood if he’d like to marry another. He read her message in another stretch of time waiting for bread to bake and looked to her with doleful eyes. “How could I marry another knowing I have a soul mate out there who admires the skill and beauty in my hands? We could…be together…secretly…without marrying. So you could still paint. And I could still bake. If you’d like.” She wordlessly asked, ‘Would you like?’ with her eyes and he nodded at her.