THIS IS A WORK OF ORIGINAL FICTION.
It will be serialized in sections over the next few days and its ending will traditionally be marked with, ‘The End.’

Scott Messer stood over his kitchen sink, eating cold cereal from a bowl, like he’d done every day since he bought his town house. He bought it for the location, and it was a great price, but the original interior design left a lot to be desired. He’d tackled two do-it-yourself projects a year to make his home look a way that pleased and suited him. He painted, laid his own ceramic tile, and changed outdated door hardware, sinks, faucets, and light fixtures. The only remaining eyesores were the awful ‘standard layout’ laminated-particle-board atrocities in the kitchen, but he put off the cabinets, because he was unhappy with everything he’d seen in specialty showrooms and home improvement stores. He knew he’d have to hire a carpenter to custom make what he really wanted. He hated that he couldn’t make them himself, but he had neither the skill nor the free time, unless he wanted to give up all of his hobbies, which he decidedly did not. He’d already waited out a long winter, and now that the weather had adequately warmed, he refused to put off his major relaxation method any longer.

Scott belonged to a gym that he frequented throughout bouts of inclement weather, but he preferred being outdoors and in nature. He liked to hike and mountain bike and run trails, but his real passion was kayaking. He took trips with friends to camp and do various other outdoorsy things, but kayaking was a solo venture. It’s the activity he did that came the closest to meditation. He liked the serenity of the water…the sounds it made…the views of plants and birds and small woodland fauna he could spot on the banks from his tucked in seat. And he liked the strenuousness of the workout. He ratcheted his one seat canoe to the top of his Subaru and headed to the local paddling spot. 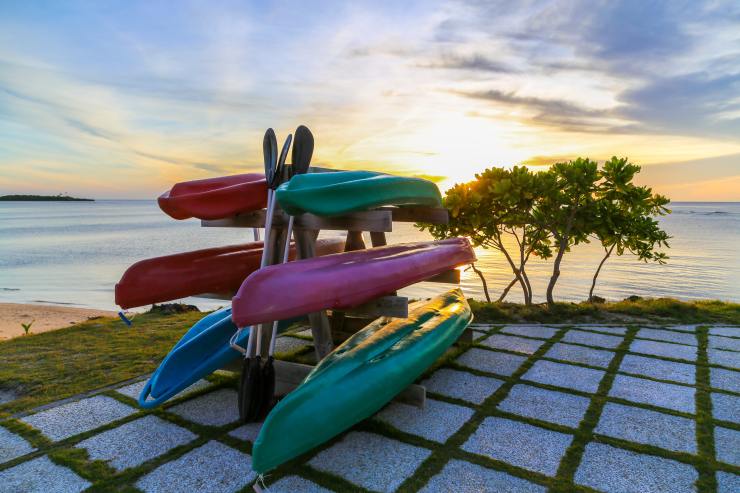 Jordan Davidson unhitched her kayak from her Jeep’s roof rack, shaded by the dense patch of trees surrounding the concrete slab she stood on. She gently kicked one of the fallen paw paws littering the parking lot as she moved toward the east bank of the Little Turlian River. It was known as a ‘river’ locally, but it was really just a three mile, fountain-fed, U-shaped creek winding through a large community park, connecting two man-made suburban lakes dug a quarter mile distance apart. She always paddled the full distance ‘the easy way,’ starting at the lake on her right and ending at the one on her left, but the more ambitious kayakers started from the left spot and went against the calm, artificial current for a real workout first, before the more relaxing cool down on the way back. Those folks parked in the opposite lot, though both lots were sparsely populated now. It was still fairly cool on that morning, but Jordan couldn’t wait any longer to get out in nature for a while. She inhaled deeply and blew out a cathartic exhale, reveling for a moment in silent gratitude for the beginning of spring and the ability to enjoy outdoor recreation again after a winter trapped in her workshop. She loved the smells and sounds and senses of new beginnings…chirping birds, budding flowers and trees, fertile ground. The walk with her kayak over her head to the upper launching dock felt great. She felt warmed despite the chilly early morning air; the fresh activity was invigorating. She prepped herself and pushed off from the soft earth at the river’s edge with her oar to get lost in the sound of the lapping water and the gentle heat of spotty sunshine on her arms and face.

She began humming Talking Heads’ song ‘Once in a Lifetime’ to herself, occasionally letting a few lyrics slip out under her breath. ‘Letting the days go by…let the water hold me down…once in a lifetime…you may ask yourself ‘How do I work this?’…same as it ever was…same as it ever was…same as it ever was…’ She lost herself in a bunch of other songs about water and spring and rebirth and decided after reaching the end of the course in the second lake to take another pass. The sunshine and the immersion in nature and fresh air had energized her so much on the first trip down the current, she practically jogged holding her vessel overhead back to the start of the downstream path. Her next embarking began with her head filled with Aqualung’s ‘Brighter Than Sunshine,’ and she was only semi-alert, lost in reverie and music in her head and operating on autopilot, effortlessly dodging floating branches and other assorted detritus, not really registering how many, if any, other people were around her. She was in her own small world there in the water; it was the part of being out on the river she treasured most. Only after a short few hundred meters of this second round of escape, however, she came upon another paddler in distress, jarring her alert.

“Dammit!” he said to himself, not noticing her at all, and grasping his right hand in his left, pressing his paddle tightly against the top of his craft with his left elbow. He’d managed to anchor himself against the west bank.

“Need some help?” she called to him, startling him a bit.

“Um…yeah. Ran into some debris I just couldn’t avoid over here, and cut my hand and…yeah. I could use some help.”

“On my way,” she replied. She struggled, slightly fighting the cross current to reach him. “You have a first aid kit?” she asked, planting the tip of her kayak in the soil to stabilize, before crawling out to tend to the man’s hand.

“No,” he sheepishly admitted. “Been paddling for years, and I’ve never needed one before and…stupid not having one, yeah?”

“Not ‘stupid,’” she consoled him. “Maybe a touch naïve and overly confident,” she teased, once she assessed his injury as minor. There was a lot of bleeding, but the cut wasn’t deep enough to require stitches. And she carried a first aid kit. She grabbed the waterproof bag she tucked into the tight space at the foot of her rig and trotted over to him. “This isn’t so bad. You right handed?” He nodded in response. “You couldn’t fix your own dominant hand properly anyway. I’ll patch you up and you can probably keep going today if you haven’t had enough yet.” She could tell from the look of his arms in the snug wet suit top, and the sheen of sweat covering his face that he was an ‘against the current first’ guy, and she smirked. He was cute. She cleaned his hand with an antiseptic wipe and he winced from the stinging medicine touching his cut. She dabbed some ointment on his hand and expertly dressed it for him. He noticed the small cuts and cracks covering her hands, and the pronounced dryness of her skin as she repacked her emergency bag.

“Thank you so much. Someone oughtta tend to your hands. They look kinda beat up.”

“Oh, it’s work. I haven’t hurt myself. Just comes with the territory,” she answered, stuffing the kit back in place and reentering her boat. “And you’re certainly welcome. Always happy to help,” she cheerfully relayed, and pushed off again, leaving him behind.

Scott watched his mysterious healer paddle away with the gentle current, wondering what she did for a living that would ravage her otherwise lovely hands. He flexed his own bandaged hand a few times, spreading his fingers wide, then clenching a fist, and admired her careful work. “I didn’t even ask her name. I should’ve offered her lunch or dinner or…something. She just came over here without any question and…I wonder if she’s seeing anyone…I wonder if I can catch her…” He pushed away from the shore, abandoning the notion of speeding up to find her again since she was now out of sight, squelched his mild regret, and gradually forced his thoughts to turn from the stranger who rescued him back to his upcoming kitchen remodel as he eased down the flowing path to where he’d parked his car at the entry point a couple miles down. He carefully loaded up, again appreciating her care of his hand, and drove home totally distracted. He almost pulled into the garage without taking the kayak down, which would have ruined his car, his garage door, and his kayak. He shook his head at himself and entered his home, showered, threw on a pair of sweats and rattled a packaged frozen meal onto the rotating plate in his microwave for lunch. He stared at it spinning and shook his head at himself. Scott was actually a talented amateur chef, but he hated being in his kitchen so much, his diet mostly consisted of cold cereal and sandwiches and freezer/microwave combination specialties. And of course, take-out. He debated pizza and Chinese for dinner as he shoveled the bland, processed food into his face, seated on his couch in front of the television. A Bandaid commercial came on, and his thoughts again turned to the guardian angel that fixed his hand in the water earlier.